Networking is a job search strategy most advisor’s agree is vital but not all job seekers feel comfortable implementing. So what is it’s true value and are there other ways to find work that might be more effective?

The problem with testing the above question is that we can never really get enough data to fully assess the effectiveness of all strategies. For instance, knowing if a person was successful by being contacted on social media is only valuable if it was compared against others from the same industry and only by knowing how many jobs they applied for and what other strategies they used. Simply asking someone on a social media networking site how they got a job is pretty meaningless because the sample is biased and unless you know the background, the type of work and the type of person, the results are almost unusable. The problem is there are too many variables.

In an effort to try and make sense of the job search puzzle, we looked at our Career Transition (CT) participants. These people were all active job seekers. They used various job search strategies, some had been successful quickly and others took some time. Summarising their results has been insightful.

Before we begin though it is important to look at what strategies people use to find work. We can probably categorise the main ones as follows:

It is very difficult to find accurate and consistent figures on the value of job advertisements in Australia but SEEK claim they have more than 140,000 jobs available at any one time and more than 39 million hits each month from browsers. They also tell us the average person looks at the website around seven times per month. The reality is that not all of these people are active job seekers but those that are probably apply for more than one role. The bottom line, there are a lot of people looking for jobs, a lot of people applying for jobs and not enough jobs for everyone, for that reason this strategy is pretty competitive.

Networking is using personal contacts to find and secure opportunities. Word of mouth is important and personal referrals are very powerful. We know they are because recruiters actively pursue them in the form of reference checks. Some organisations have internal systems where they reward their staff for referrals that lead to successful appointments.  A personal referral, as a result of using your network, before a job goes to market can often be the catalyst that helps secure work.

Cold calling, often confused with networking, is making contact with individuals in companies where you would like to work. The difference between this and networking is that there is no personal referral and therefore no obvious common ground upon which to build a relationship.

Adding your Resume to Job Board Database

Job board databases such as SEEK’s resume library are excellent tools. Many job boards have them and some charge companies to access them. There are also some websites such as Livehire that are a dedicated database library of job seekers.

Social media is increasingly being used to proactively identify candidates. LinkedIn is one such medium used to search for and make contact with potential employees. The others like Facebook and Twitter are also used to post opportunities, contact people and are fast becoming ways for jobs seekers to approach potential employers.

Recruitment agencies have their place but they are often staffed by salespeople rather than recruiters. Having said that, they are helpful for the job seeker looking for an easy to fit job and you are able to establish a personal relationship with the recruiter and or gain temporary employment. Nevertheless, given that most are just going through the motions of ensuring they achieve their marketing and sales KPI’s, many of them are no more than a tick the box style recruiter where they are not concerned about true value just whether you can do the job they are trying to fill now for the next twelve months, my advice is don’t put all your eggs in one basket.

Have you ever considered offering your time in return for experience rather than salary? This strategy is used by graduates and school leavers effectively and even the mature job seeker with significant life skills. Some companies like offering work experience, they get something for nothing, they get to try before they buy and for the job seeker it gives them experience they can put on their resume. I don’t have any hard data to support the value of this strategy but anecdotally I find that the few who do this are usually successful in finding work as a consequence.

You tube videos, standing on the freeway with a sign, advertising on a billboard, sending fruit baskets, creating websites, the list is endless. They work sometimes; it depends on the job and who is recruiting.

By far the most widely used job search strategy was applying for advertised opportunities. This was followed by networking and then social media.

The largest number of jobs filled was through networking. We classed networking as the successful strategy if the CT participant had some prior relationship with the recruiter or was referred to the position by a decision maker or an influencer, even if the role was advertised.

Networking also seemed to be the most effective strategy as it accounted for a 74% success rate for those people that used it. There is some grey area here as we can consider social media and cold calling, methods of facilitating networking. When social media was used to reconnect with old acquaintances and colleagues we classified this as networking. Social media was successful when a person was approached directly by a recruiter as a consequence of their activity. Similarly with cold calling, if there was no prior relationship then cold calling was the successful strategy but if there was common ground in the form of an acquaintance we classified this as networking.

So what conclusions do we draw? I think the obvious one is that networking is by far the most effective strategy used by our sample group. I suspect it is probably the most successful and effective strategy used by all job seekers. I think with some more detailed data we might find slight differences in these percentages but my gut feel is that networking will always be more effective than the other strategies used for job search. In short, Network, Network, Network should indeed be the catch cry of all job seekers and career coaches. 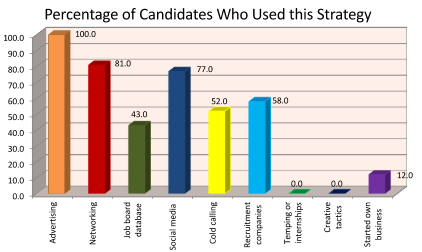 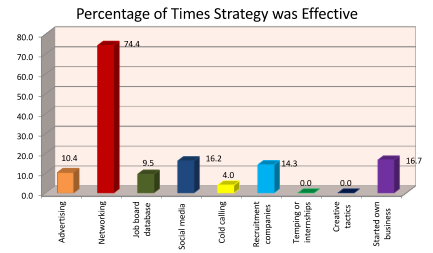 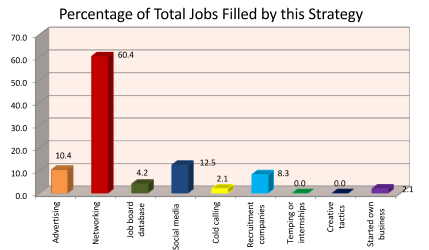 Peter has over 20 years in the delivery of Outplacement, Career Transition, Psychometric Testing and Recruitment Services. He has multiple post graduate qualifications in psychology including organisational and education psychology and has owned and operated his own businesses for more than 10 years.

We're not around right now. But you can send us an email and we'll get back to you, asap.